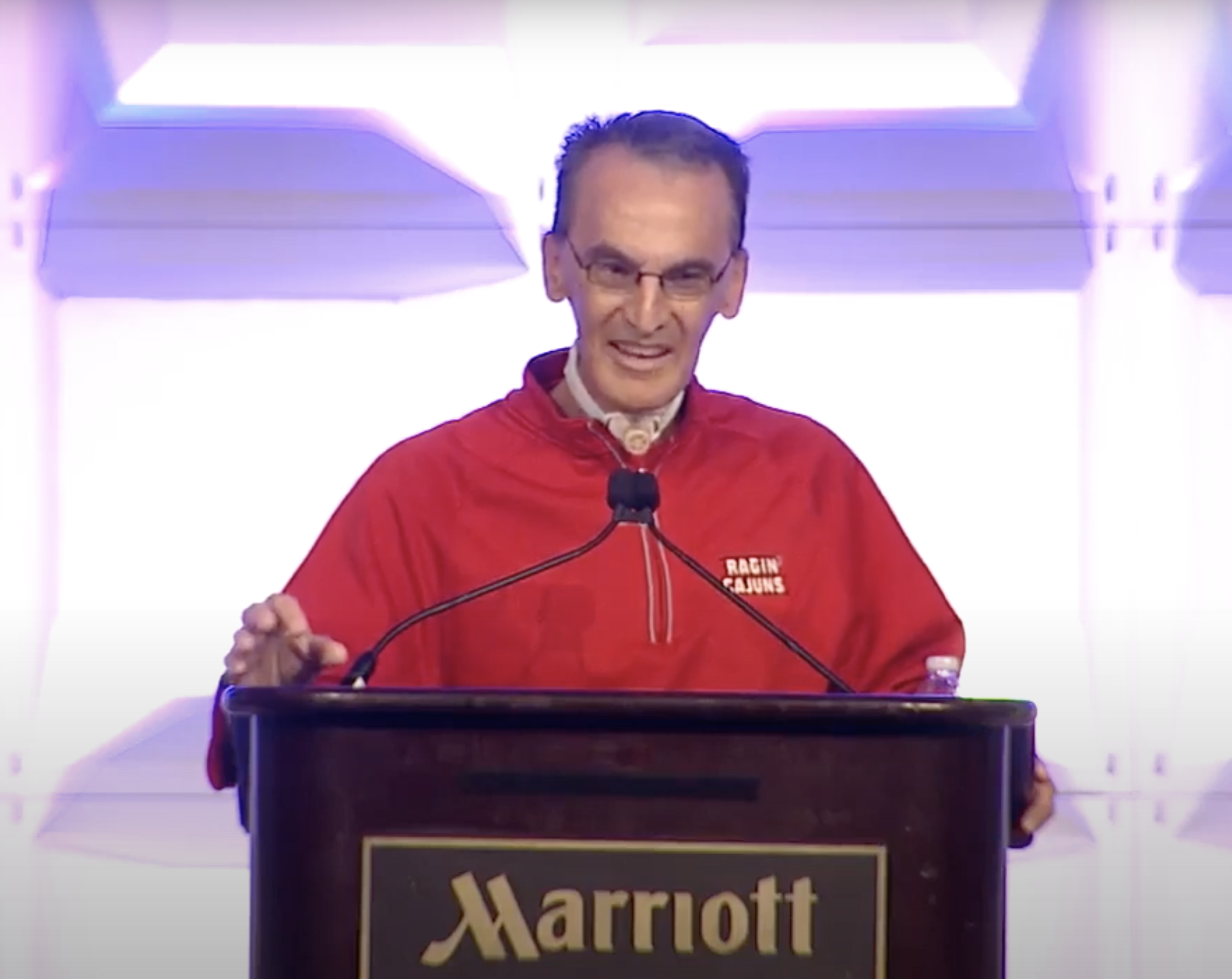 Lafayette, Louisiana, United States - 09/10/2021 — According to the Settlement Agreement, Receipt & Release in this matter signed on September 08, 2020 this matter between the Board of Supervisors for the University of Louisiana System and Michael Lotief has been resolved. According to the settlement agreements $100,000.00 was paid to Lotief by the State of Louisiana Office of Risk Management, another payment of $50,000.00 was paid to Lotief by the University of Louisiana-Lafayette Foundation, and additionally Lotief received from the University's Athletic Department two fully functioning pitching simulators plus the Home Plate pitching machine (each valued at $25,000.00 each).
The additional terms of the settlement are as follows:

*The University of Louisiana at Lafayette agrees to return to Lotief, if ever found, his autographed photograph of Saint Mother Theresa of Calcutta.

*The University of Louisiana at Lafayette agrees to assist Lotief in good faith efforts to scrub negative social media.

*A copy of the lawsuit filed by Lotief and the attached exhibits thereto (signed exculpatory statements by players/students athletes of ULL) will be made a part of Lotief's personnel file at the University and attached to the settlement agreement.

*A copy of the letter from Dr. Jason Durel, Lotief's treating ENT doctor, which describes his paralyzed vocal chords and his voice limitations will be made part of Lotief's personnel file at the University and attached to the settlement agreement.

*The University will not say, not voice, not post, not write &/or not make or otherwise disparage or make any demeaning comments towards Lotief or otherwise take any action which could be reasonably be expected to adversely affect the personal or professional reputation of Lotief.

*Lotief agrees that the lawsuits filed by the former softball players be settled at the same time.

*And Lotief declares that in further consideration, OTHER CONSIDERATION AND COMPENSATION received by him this date.

Lotief asserted all along that the University's assessment that he acted "hostile, vulgar & violent" was "false, slanderous and intellectually dishonest". For instance, in the ULL Human Resources report, there are multiple characterizations of Lotief's voice tone, more specifically accusing him of "using a demeaning & insulting (voice) tone" or "imitating the voice of a child". It was agreed upon in the settlement between Lotief and the University that the letter from Dr. Jason Durel describing his voice limitations be attached to the settlement agreement. In the agreed upon attached letter from Dr. Jason Durel, Dr. Durel states that it is "NOT POSSIBLE; that Lotief's "vocal cords are in a fixed position and are completely paralyzed; therefore, they cannot move in abduction or adduction. It is impossible for Coach Lotief medically to change the tone of his voice". Dr. Durel concludes, " he is tracheostomy dependent for breathing and is able to voice minimally by forcing air through his fixed vocal cords. This is a permanent scenario and CHANGING HIS VOICE IS NOT POSSIBLE". READ DR. DUREL's FULL LETTER HERE.

In September 2018, Lotief filed a lawsuit against ULL after being placed on administrative leave on October 06, 2017 and fired on November 01, 2017. The lawsuit claimed the execution of a fraudulent investigation by the ULL administration in an attempt to justify their dismissal plans (fired Lotief on November 1, 2017 despite paying him a $20,000.00 bonus in August 2017 and after he received positive, glowing reviews on exit interviews completed by the softball student-athletes, as well as high marks made by the S.W.A./sport administrator in her year end evaluation). READ FULL LAWSUIT HERE.

After Lotief filed suit, his attorneys, Jack McElligott and Glen Edwards presented a detailed , hour long press conference with extensive exculpatory evidence, that absolved & exonerated Coach Lotief & showed why the reasons the University gave for his termination were wrong and false and intellectually dishonest. The lawyers presented the signed exculpatory statements by the then present ULL softball players. These signed, exculpatory statements by the then present ULL softball players were attached to the lawsuit and now, agreed to be attached and made part of the settlement agreement between Lotief and ULL, which unequivocally deny the "hostile, vulgar, violent" labels dishonestly tagged on the Coach. On October 29, 2017, the softball team signed a statement stating that the investigation into Lotief's conduct was "unjust", and that the ULL administration was "intimidating players and lying about the ongoing investigation". The players' statements provided that the complaints of a hostile environment were "untrue" and that "there was instead a competitive environment holding the team to championship standards". SEE KATC STORY "SOFTBALL PLAYERS PROTEST UNJUST INVESTIGATION. The players statements affirmed "the softball team's belief that Lotief was being targeted and retaliated against for standing up for the female athletes"; assistant softball coach, Sarah Corbello, presented the administration with the exculpatory signed statements from the players and softball team, because the then present softball players were never asked & never interviewed during the HR investigation. WATCH VIDEO HERE FROM KATC OF THE SOFTBALL PLAYERS STATING THAT THEY WERE NEVER CONTACTED DURING THE FLAWED INVESTIGATION.

For her efforts to collect the players signed exculpatory statements and presenting them to the ULL administration, assistant softball coach, Sarah Corbello, was immediately fired on the spot, even though the investigation was still ongoing. WATCH EXCERPT OF LOTIEF's LAWYER PRESS CONFERENCE ADDRESSING THE SIGNED EXCULPATORY STATEMENTS IN SUPPORT OF COACH LOTIEF HERE.

ULL's claims of "physical violence" against a female strength coach were blatantly over exaggerated by the University; at most, the University's own account only alleged an index finger by Lotief onto the strength coach's shoulder or a "poke" or as described by the Complainant herself as a "finger" on her shoulder, but "not aggressively". In the ULL HR report, it specifically states from Lotief, "I DID NOT TOUCH HER". SEE ATTACHED EXCERPT FROM ULL HR REPORT. In the ATTACHED VIDEO FROM LOTIEF's LAWYER's PRESS CONFERENCE, his lawyer puts in context that the strength coach is a professional mixed martial arts fighter and golden glove boxing state champion and Lotief has a feeding tube in his stomach and a trach in his throat which requires him to use one of his hands to press the trach when he is speaking. WATCH VIDEO HERE.

Lotief asserted all along that the University's attempt to label him as "hostile, vulgar & violent" ARE "false, slanderous & intellectually dishonest" WATCH HERE, (LOTIEF's lawyer explaining the claim for slander, defamation) and the terms of the settlement agreement between Lotief and the University reflect it; payment to Lotief by The State of Louisiana Office of Risk Management of $100,000.00, payment by the University of Louisiana at Lafayette Foundation of $50,000.00 and the University Athletic Department giving to Lotief two fully functioning pitching machines purchased by the University for $25,000.00 each/per simulator which included the Home Plate pitching machines with video simulators (screens, projectors, computer equipment that synchronizes the pitch with the video). The University also agreed to assist in scrubbing negative social media and the University agreed not to make any demeaning comments towards Lotief or otherwise disparage his personal or professional reputation.

Coach Lotief enjoyed a hugely successful 17 year stint at ULL (started originally in 2001-02 as the volunteer for the softball team while also being a practicing attorney; then from 2003-2012 as co-head coach with his wife, Stefni Whitton Lotief, who was a two time academic &athletic All American pitcher at then USL, now ULL). Of the 17 years with the softball program, the softball team won 15 conference championships, qualified for and advanced to the NCAA post season tournament every single year; won 8 NCAA Regional Championships, appeared on ESPN in 7 SUPER REGIONALS and hosted the 2014 Super Regional in Lafayette and defeated the Arizona Wildcats and legendary coach, Mike Candrea. The Ragin Cajuns softball team made three (3) trips to the Women's College World Series during Lotief's tenure: 2003, 2008 & 2014. Lotief finished his career with 729 wins; he lead his teams to over 40 wins in every season; eight seasons with 50 or more victories, and a school record 60 wins in 2004. Lotief's graduation rate of his players was over 90% and over 25 of his student -athletes earned All-American honors, some on multiple occasions (totaling 45 All-American awards presented during his stint at the University). SEE A ULL PROMOTIONAL GUIDE/ ULL FACT SHEET PROMOTING THE SUCCESSES OF ULL SOFTBALL UNDER LOTIEF's DIRECTION.

Lotief, especially during the 2015 season and thereafter, waged a daily battle with the effects of extensive radiation of his nasopharyngeal/larynx cancer, most noticeably, the paralysis of his vocal chords, which required a feeding tube for his nutrition during the 2015 post-season; then the installation of the tracheostomy tube and speaking valve later that same year. In 2016, Lotief was named by his peers the recipient of the Donna Newberry Perseverance Award SEE HIS FULL ACCEPTANCE SPEECH HERE.

Compose your email to Jeremy Johnson at Next Level Media.