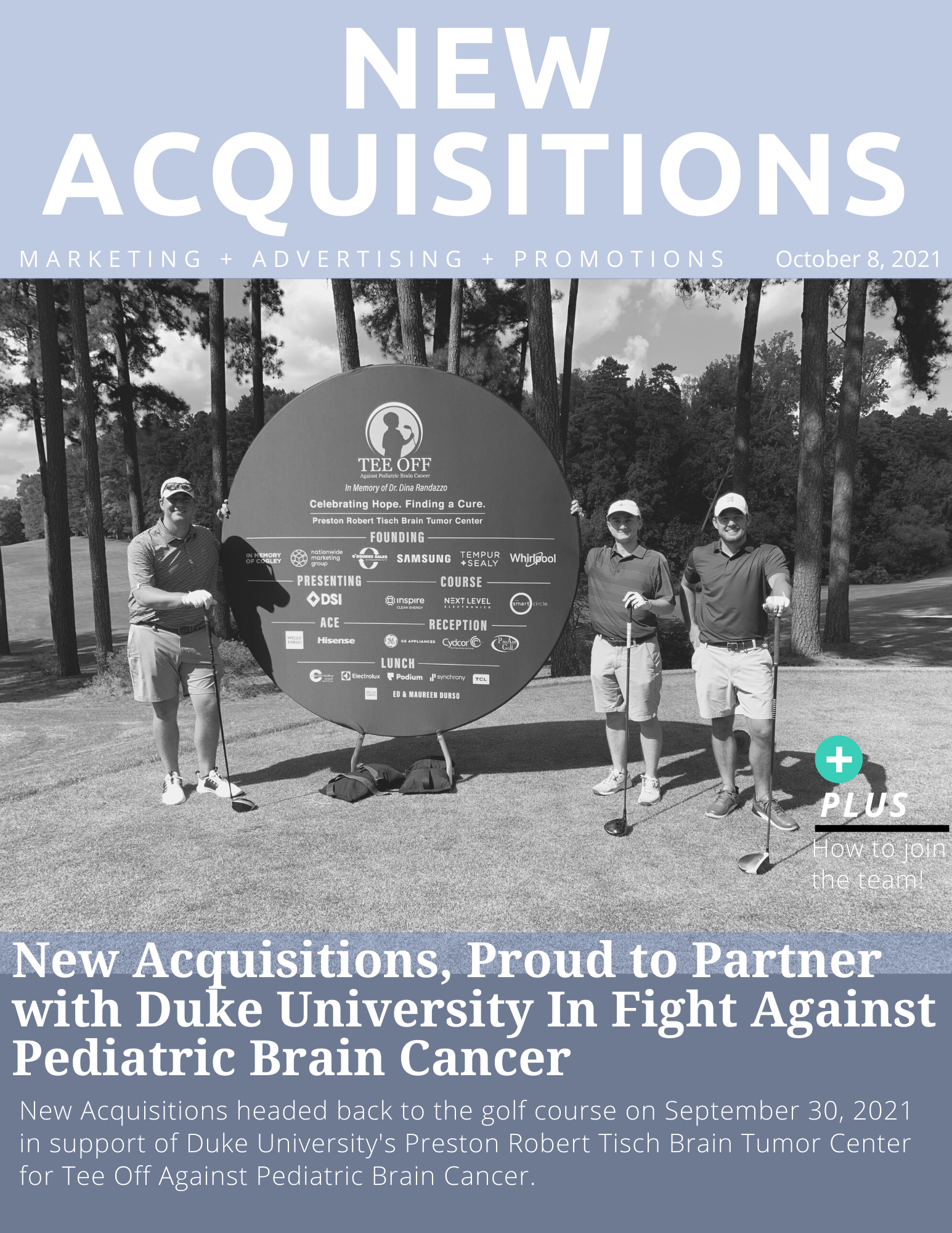 Atlanta, Georgia, United States - 10/08/2021 — Atlanta, GA - New Acquisitions headed back to the golf course on September 30, 2021 in support of Duke University’s fight against pediatric brain cancer. The firm’s National Director, Adam Gerald, attended the Washington Duke Inn & Golf Club in Durham, North Carolina to participate in a charity golf tournament raising money for pediatric brain cancer research. According to their website, The Preston Robert Tisch Brain Tumor Center was one of the first brain tumor research and clinical programs in the United States. Since then, it has advanced to become one of the best pediatric and adult neuro-oncology programs in the world. Tee Off Against Pediatric Brain Cancer is an annual event supporting the Preston Robert Tisch Brain Tumor Center at Duke and their pioneering research in the field.

The tournament included around thirty teams of four who, while raising money for the organization, competed for awards and prizes that were later distributed at a reception dinner where stories of the patients and healthcare workers were told. Gerald shared that “there wasn’t a dry eye in the house as we heard countless stories from these incredible heroes and survivors about the impacts of this disease. There were kids around five and six years old who had already beat cancer two to three times and it was inspiring to see them continue to fight!” Along with the tournament and reception dinner, the night also included a hall dedicated to the children who lost their battle with brain cancer this year at the local Duke hospital. It was an emotional experience to see the number of children who unfortunately were unable to continue their fight, but a great reminder of what these doctors are fighting to find a cure for.

This was the third year of the annual tournament and they were able to raise over a million dollars doubling last year’s contributions. Gerald and his team donated $25,000 to support the cause and noted that this was one of the greatest tournaments he’s ever been a part of and looks forward to continuing to partner with this organization and their efforts to fight pediatric brain cancer.

To learn more about The Preston Robert Tisch Brain Tumor Center and how you can donate to support their research, please visit: https://tischbraintumorcenter.duke.edu/

To learn more about the New Acquisitions team, please visit their website at www.newacquisitionsinc.com

Compose your email to Taylor Luedy at New Acquisitions.