Is Yocan Orbit Wax Pen A Game Changer? The Puffco Plus Rival?

Is Yocan Orbit Wax Pen A Game Changer? The Puffco Plus Rival? 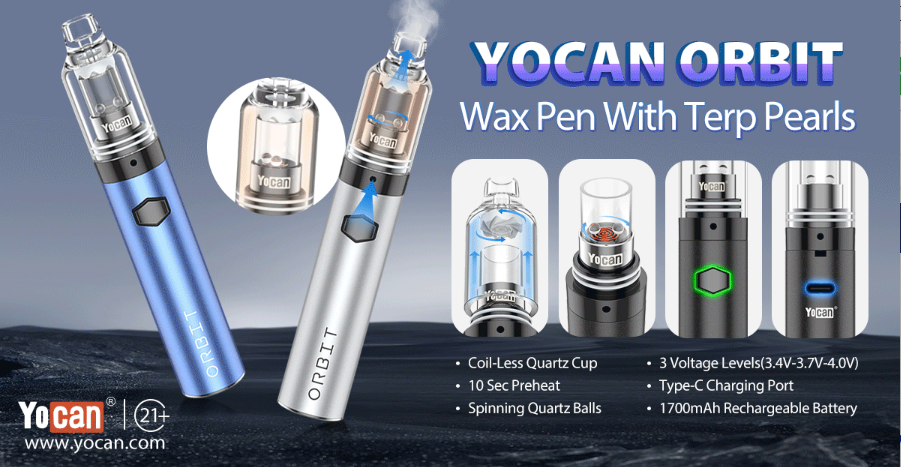 Shenzhen City, Guangdong Sheng, China - 04/27/2022 — Yocan launched a new wax pen in January 2022, Yocan Orbit, which attracted a lot of stoners’ attention during the pre-sale period. It is different from Yocan's most classic wax pen, the Yocan Evolve series. Instead of using QDC / QTC coil, the Yocan Orbit developed a brand-new QBC coil, which is also the coil-less quartz cup that users are looking forward to. The most ingenious thing is that they unexpectedly thought of putting two terp pearls in the small quartz cup, designing the glass mouthpiece and carb cap as a whole, and turning them into the top vertex airflow system. The Yocan Orbit skillfully converts the kinetic energy of airflow into the kinetic energy of quartz balls. Just simply inhale and the two quartz balls will rotate at a very high speed to achieve even heating distribution and sufficient vaporization. Genius!
Based on the Yocan Orbit, we had a brief conversation with the official representative of Yocan!

Q: Yocan Orbit is different from any previous Yocan vaporizer, wondering what the Yocan Orbit was originally designed for?

Yocan: There are too many consumers complaining about the maintenance of old-fashioned coils. There are also many newbies who cannot taste the pure flavor due to improper use, resulting in the waste of expensive materials, and unfortunately even greatly shortening the life of the device! It is Yocan who constantly listens to user feedback and focuses on solving customers' difficulties, cleaning, and maintenance, keeping the original flavor, the balance of cloud and flavor, hidden dangers caused by metal exposure, etc. Drawing on the experience of traditional dab rigs, after thousands of designs and improvements, the Yocan orbit was born!

Q: Yocan Orbit attracted a lot of attention during the pre-sale period, what do you think is the most fascinating thing about it?

Yocan: The answer can be found on social media. The most eye-catching is the terp pearls in the quartz cup, plus the top vertex airflow system. This is a revolutionary innovation for the wax pen. As the YouTube influencer said, Yocan Orbit is the Puffco Plus Rival and a Game Changer! When you go out and miss flavor rips, don't have to worry about the choice of vaporizer anymore, Yocan Orbit is your best choice!

Founded in 2013, Yocan holds many exclusive patents related to vape technology, occupying a huge share in the European and American Cannabis Vaporizer Market.

Q: The portable cannabis vaporizer market is highly competitive, what makes Yocan win the favor of so many consumers?

Yocan: Yocan is famous for its extremely cost-effective portable vaporizers, but it never ignores the importance of controlling product quality! We always follow the concept of a healthy lifestyle conveyed by e-cigarette products and put the health and safety of users first. This is also the best way for Yocan to support cannabis culture! We believe this is one of the reasons why Yocan is supported by many consumers!

Q: Yocan's business form is mainly in cooperation with distributors, how have you managed the business partnerships effectively over the years?

Yocan: Yocan always puts customers first, pays extensive attention to user feedback, and strives to improve service quality. Even if we need to sacrifice brand interests, Yocan will not give up on this goal. Win-win is Yocan's commitment to partners from beginning to end!

We expect the Yocan R&D team to explore more possibilities of portable cannabis vapes in the near future!

Compose your email to Michelle at Yocan Technology Co., Ltd.