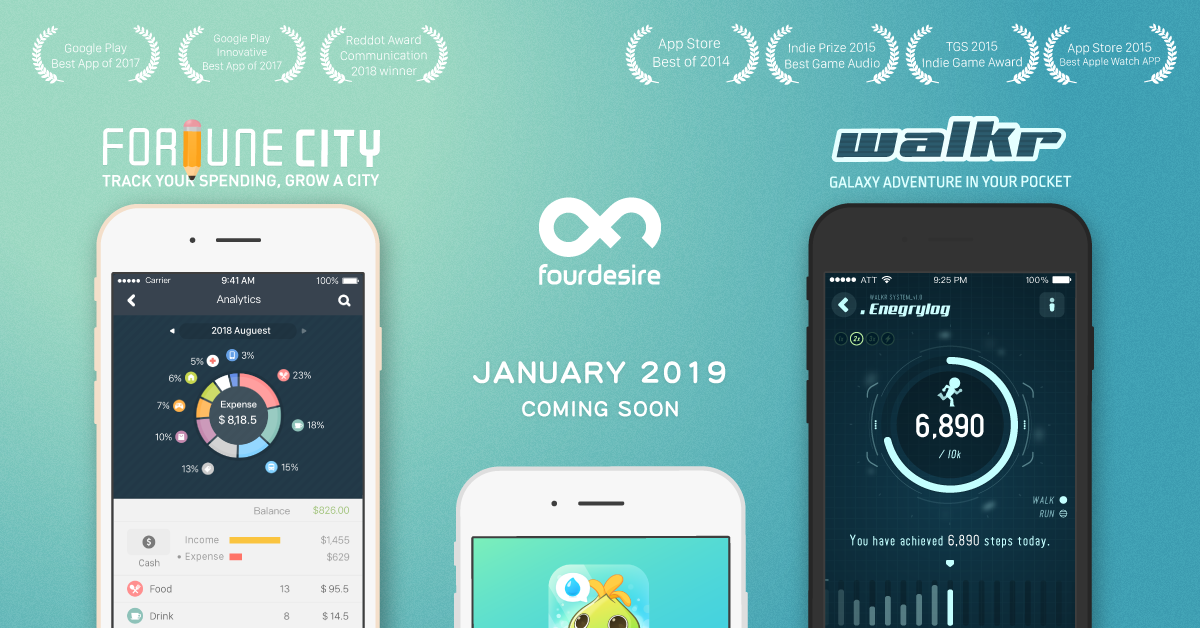 Getting some things done such as getting fit can be a bit of a bore. The folks at Fourdesire brings more fun and games to some of the most exciting lifestyle apps available to help you achieve more.

Fourdesire designs entertainment-added lifestyle apps that make routine everyday tasks fun and accessible. Based on the principle of gamification, the apps use game design elements to enhance user engagement and participation.

Why are gamified apps so successful?

According to “Value of the Gamification Market Worldwide,” reported by the Statistics Portal, the gamification market is expected to reach $12 billion in revenueby 2021. Fourdesire believes the fascination with game-style apps has a strong scientific basis.

“About77 million Americans own smartphones, and that number is growing,” Chen notes. “And while people are serious about their jobs and life success, they’re becoming increasingly over-stressed. At Fourdesire, our group envisions a world where problem-solving is fun.”

To bring this vision to life, Chen partnered with a group of like-minded individuals to create Fourdesire and launched Plant Nanny in 2013. This app, which is still widely popular five years after its initial release, encourages users to hydrate regularly. When users drink a cup of water, a “plant” on the screen grows, delivering a visual reward and an element of fun.

Building on the immediate success of Plant Nanny, the company later released Walkr, a galaxy adventure game that motivates users to walk more, and Fortune City, a lively bookkeeping app. The Company executives have revealed they will unveil an amped-up version of the Plant Nanny app soon.

“We’re thrilled with the positive feedback from our users,” Mr. Chen says. “Walkr is projected to increase the average user’s steps from 20-30% daily, which is significant. Even better, they’re having a great time doing it. That’s exactly what we envisioned when we started Fourdesire.” Chen added, “Putting these important elements together, we combined a serious need with serious fun, and people have really responded.”

Backing this information with data, Fourdesire says more than 18 million people currently use at least one Fourdesire lifestyle app. The company anticipates even more explosive growth for 2019.

Chen says the company will kick off 2019 with a bang by ratcheting Plant Nanny up “a few major notches” in both design and functionality. “We (saw) something really beautiful and elegant in our minds,” Chen says, “and we’re excited about how this new generation of a very popular app will look.”

But the upgrades aren’t just skin-deep. “The new design will be based on a more modern interface and a much faster game engine,” Chen reveals. “While we’re waiting for the official unveiling to disclose details, we can say that people who enjoy and get fit with Plant Nanny are going to be thrilled, and it’s expected to attract new users as well.”

“We intend to keep moving forward and delivering a superior experience to people interested in healthy, organized lives, but who definitely have that fun side,” Chen says. “We’re excited for the future and glad to see people put their physical and emotional health back in the forefront at last.”

Founded in 2013, Fourdesire is a Taiwanese app design studio that develops gamified lifestyle tools. With more than 18 million users worldwide, the company believes in creatively using fun to solve real-life problems. Publications such as Business Insider, Buzzfeed, and The Washington Post have reported on the company's products and developments. As of the 4th quarter of 2018, the firm has three apps: Plant Nanny, Walkr, and Fortune City in the Apple Store and the Google Play Store. For more information, visithttp://fourdesire.com/en/

Compose your email to Cara Huang, Marketing Manager, at fourdesire.com.