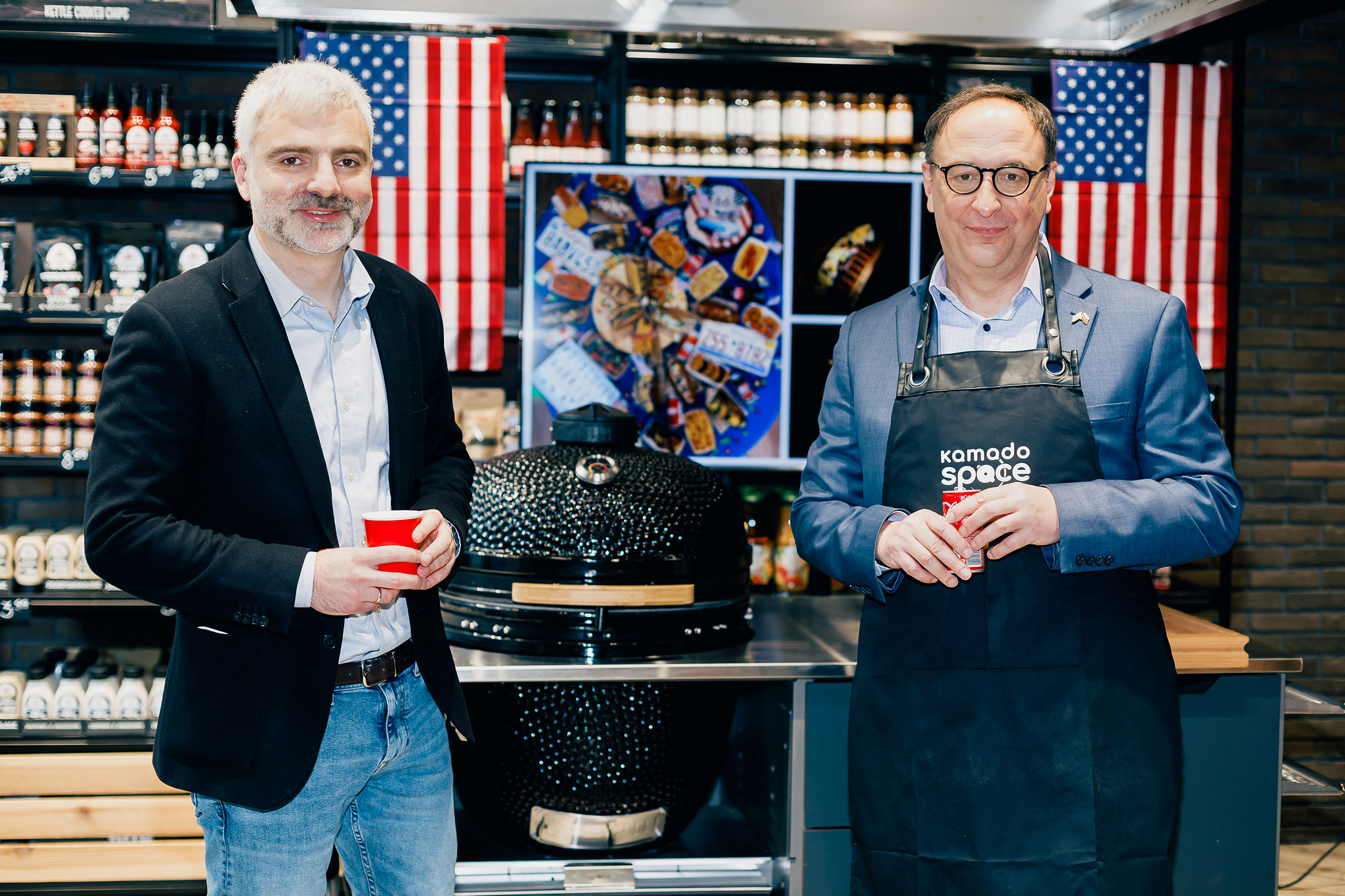 Vilnius, Lithuania - 11/15/2021 — It must have been yet another monthly competition in the Lithuania Grilling and Smoking Facebook group – the largest grilling community in the European Union. But the #discoveramerica lighting effect was so huge that it not only caused US flags to run out of stock country-wide, but forced US Ambassador Robert Gilchrist to light a Kamado grill by himself.  KamadoSpace has sponsored  4 of its units for the win and definitely had something to do with it.

A beef burger made by Superman, or a mac & cheese grilled by Captain America, posing on a Yamaha, Smash burgers, BBQ pork ribs, Buffalo wings – as your tastebuds desired, served with patriotic US-themed plates and napkins. Coke and Dr. Pepper for drinks. And the US flag in the background by default.

The barbecuers have been working hard for the reason – the U.S., with its troops on Lithuanian soil, is the most important ally of this small country, located in the middle of continental Europe. On top of that, the $17K prize pool must be the largest known total prize pool in Facebook BBQ communities. KamadoSpace, the European ready-to-assemble outdoor kitchen startup, who will be entering the US market next season, sponsored 4 units for the win. This has boosted user engagement since most barbecuers need more prep area and storage than grills normally provide.

The most jaw-dropping performance was created by Justinas Juda, who incarnated Captain America in this competition. He has won a $3.5K KamadoSpace Infinite Island.

Every BBQ lover’s dream kitchen, flat packed on a pallet, was handed to Juda by the U.S. ambassador to Lithuania, Robert Gilchrist, who praised Lithuanians for turning American cuisine into masterpieces.

He said Lithuania and United States not only had been working closely on security and defence in the international arena, but obviously had much more in common.

“Food is one of our favorite ways to share and learn about culture – and it’s always exciting for me, as ambassador, to see Lithuanians putting their own special take on American food tastes. As Thanksgiving approaches, we’ll be sharing some of our favorite Thanksgiving recipes online, and I hope to see many Lithuanians making turkeys and other traditional American treats. It’s a wonderful way for us all to show how thankful we are for the strong relationship between our countries,” the Ambassador jested.

BBQ fan and a sole leader

Juda must have collected over 1.6 thousand post likes to beat his competitors. His photos seemed so delicious some commenters wanted to take a bite at their phones.

Juda said he was encouraged by other participants to go that extra mile, not just because of the amazing prize pool.

“Being a huge grilling fan obviously I was very excited about the #discoveramerica idea.  When you do something you‘re passionate about, you don’t think about how much time it requires nor the effort,“ said Juda in response to the commendations for his advanced cooking skills.

Juda – the winner of the 1st week’s competition, wowed the folks not only with his suit, Harley, and mouth-watering photos, but also with a fairly simple recipe, which eventually turned into a super tasty American sandwich.

After the first week’s recipes raised the bar, the contest must be getting hotter. For two more consecutive weeks, the weekly winners will receive a KamadoSpace Infinite Island outdoor kitchen. Finally, at the end of November, the author of the most engaging recipe will receive a luxurious XL size KamadoSpace kitchen with an XL size Kamado BONO Limited grill, among other prizes.

The Lithuania Grilling and Smoking group is the largest closed cooking group per capita on Facebook. With 96 thousand grill fans in Lithuania, which has a population of 2.6 million, there’s still much more space to grow. The largest US group is BBQ Smoking for Beginners with 285 thousand members.

Compose your email to Roberta at Winning media group.