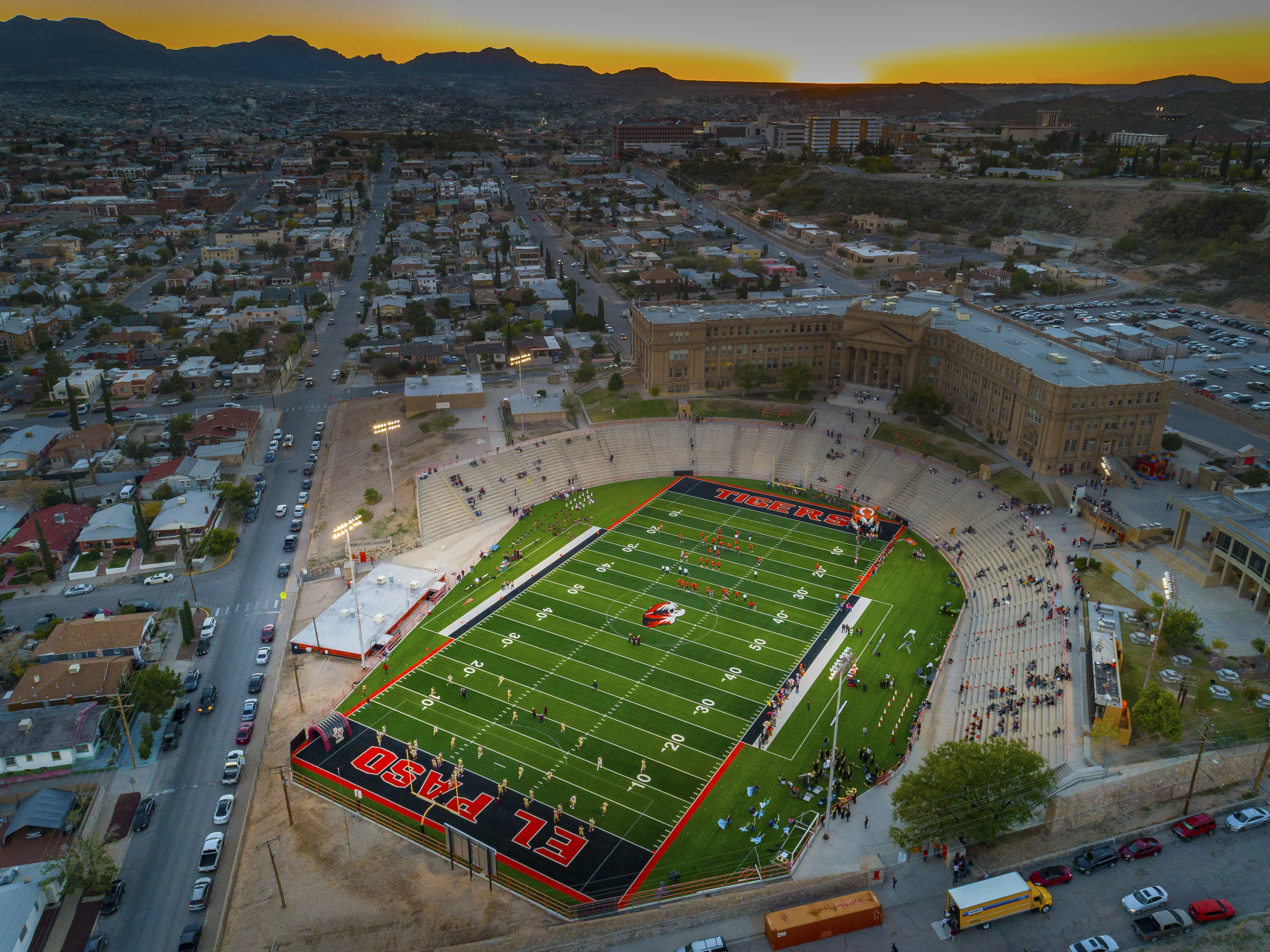 El Paso, TX - 11/08/2019 — When it comes to picturesque high school football stadiums across America, it’s hard to beat Jones Stadium located on the campus of El Paso High School. Perfectly positioned above the downtown El Paso skyline, Jones Stadium celebrated 100 years of existence in 2016. Jones Stadium was voted as the second-best stadium in America behind Mitchell Stadium in Bluefield, which rests on the soil of West Virginia and Virginia.

“We have incredible views in the Sun City but none more impressive than the views from Jones Stadium,” El Paso Superintendent Juan Cabrera says. “We are truly honored and proud of Jones Stadium, which in our opinion is the most beautiful and historic stadium in America,” adds Cabrera. El Paso ISD Athletic Director Maria Kennedy says, “El Paso High School’s Jones Stadium has the most magnificent view in the country.” Kennedy adds “There is no other place like it. People that visit El Paso for the first time, always ask to visit this stadium. When outside groups need a venue, they will ask to use Jones Stadium simply for the view. We are truly humbled by the recognition this stadium has received. We invite all visitors to El Paso to make time to visit our jewel of a stadium.”

Hellas installed Matrix® turf with Helix Technology and Geo Plus™ organic infill at ten different El Paso ISD high schools including Andress, Austin, Bowie, Burges, Chapin, Coronado, El Paso, Franklin, Irvin, and Jefferson. Matrix turf is well-known for its reliability and durability and manufactured at Hellas Fibers in Alabama and tufted at Hellas Textiles in Georgia. The Helix feature consists of shape memory technology added during the manufacturing process, allowing each fiber to curl and return to its original position while securing the turf’s infill. Allen Eagle Stadium has Matrix turf with Helix installed by Hellas.

Geo Plus organic infill is made of 100% environmentally friendly materials and uses a combination of carefully selected, specifically treated components to ensure the highest level of sports performance and turf playability. Geo Plus infill is comprised of a combination of organic coconut fibers and cork.

Hellas also installed a Cushdrain® shock pad above the laser-graded drain stone foundation at Jones Stadium. The paved-into-place system is made of mega rubber and moisture-cured polyurethane, which adds safety for athletes by increasing the shock absorption.

Hellas Construction, Inc. headquartered in Austin, TX, is one of the largest sports construction contractors in the United States, specializing in the general construction of sports facilities and sports surfaces. Hellas specializes in the base construction, installation and turf maintenance of artificial turf systems, track systems, tennis courts, and multi-use playing surfaces. hellasconstruction.com

Compose your email to Jeff Power at Hellas Construction.